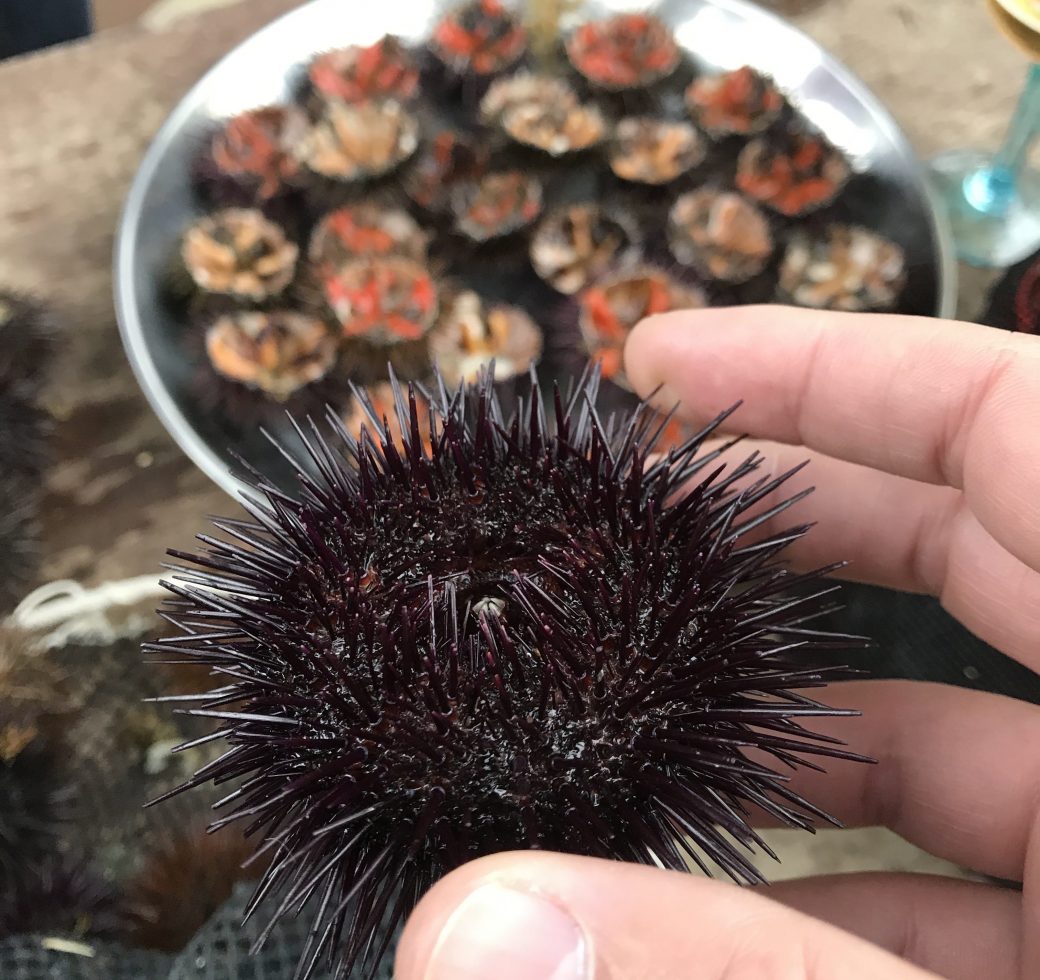 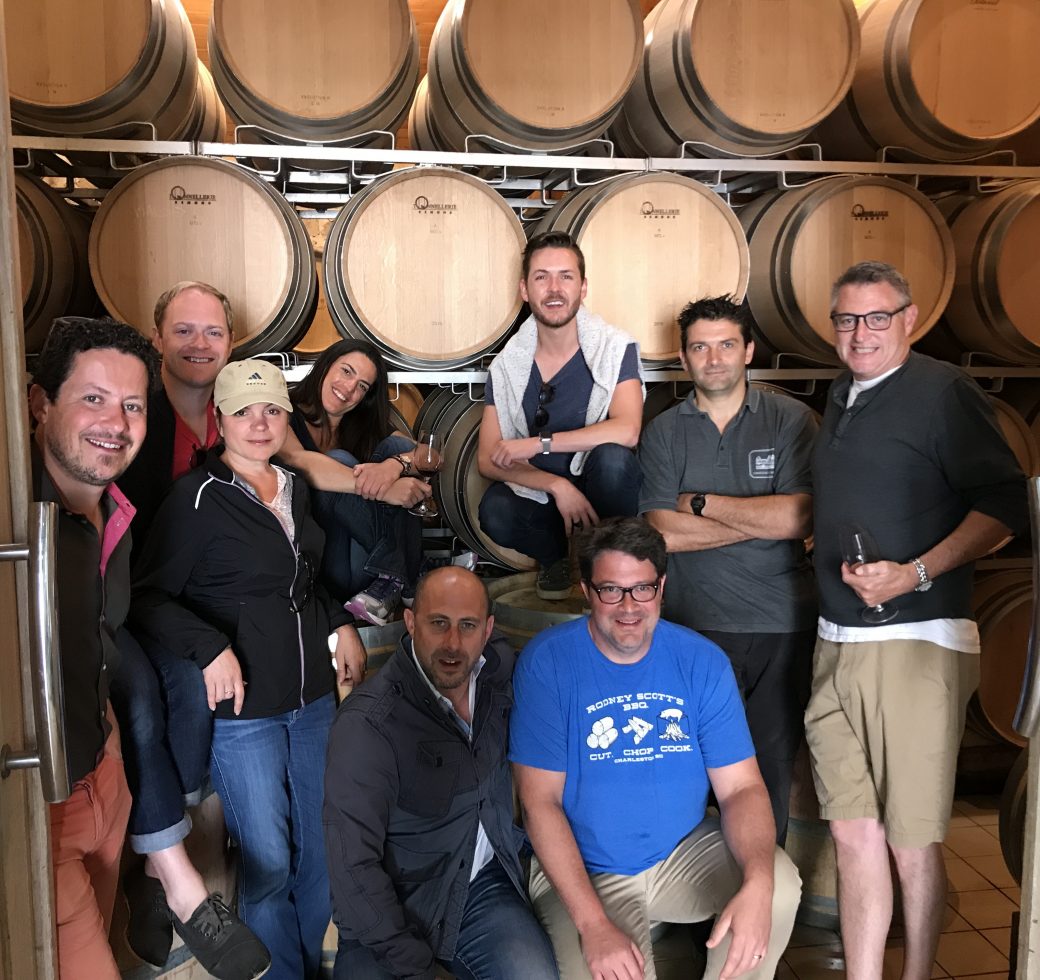 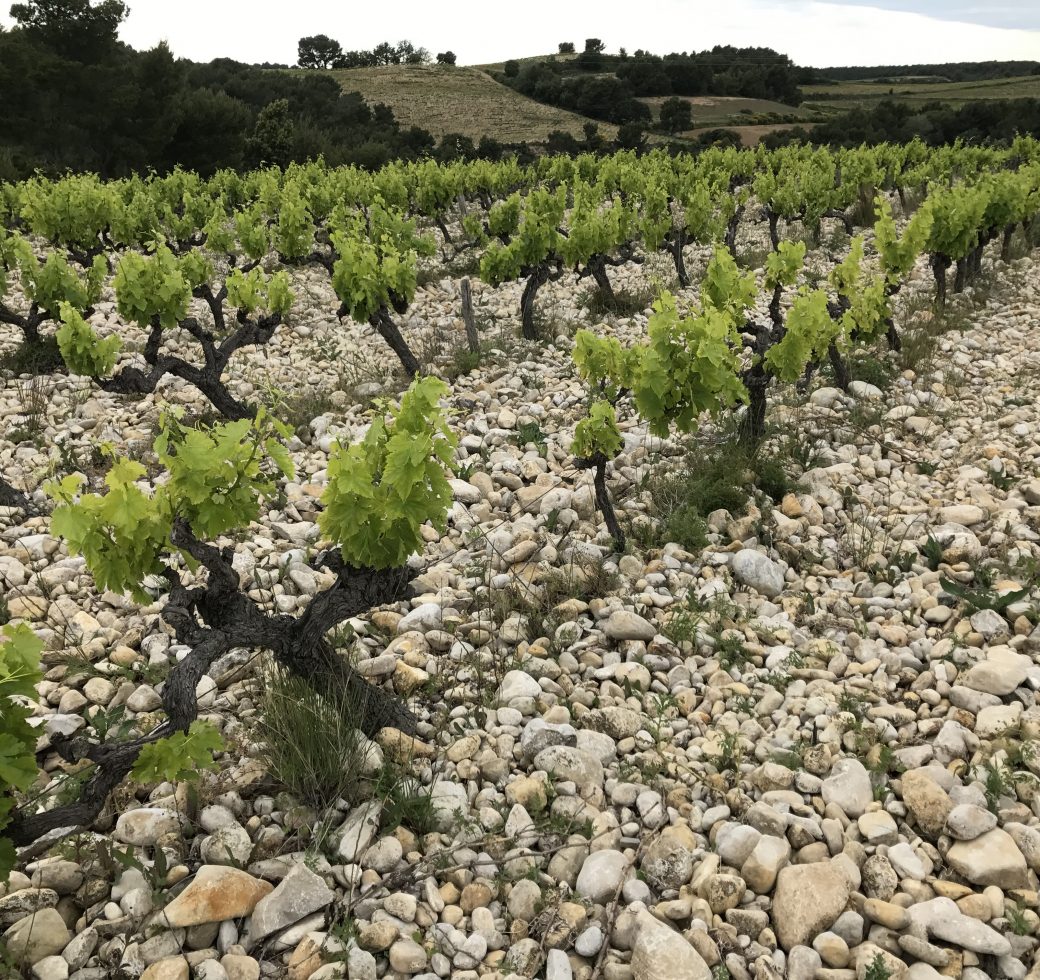 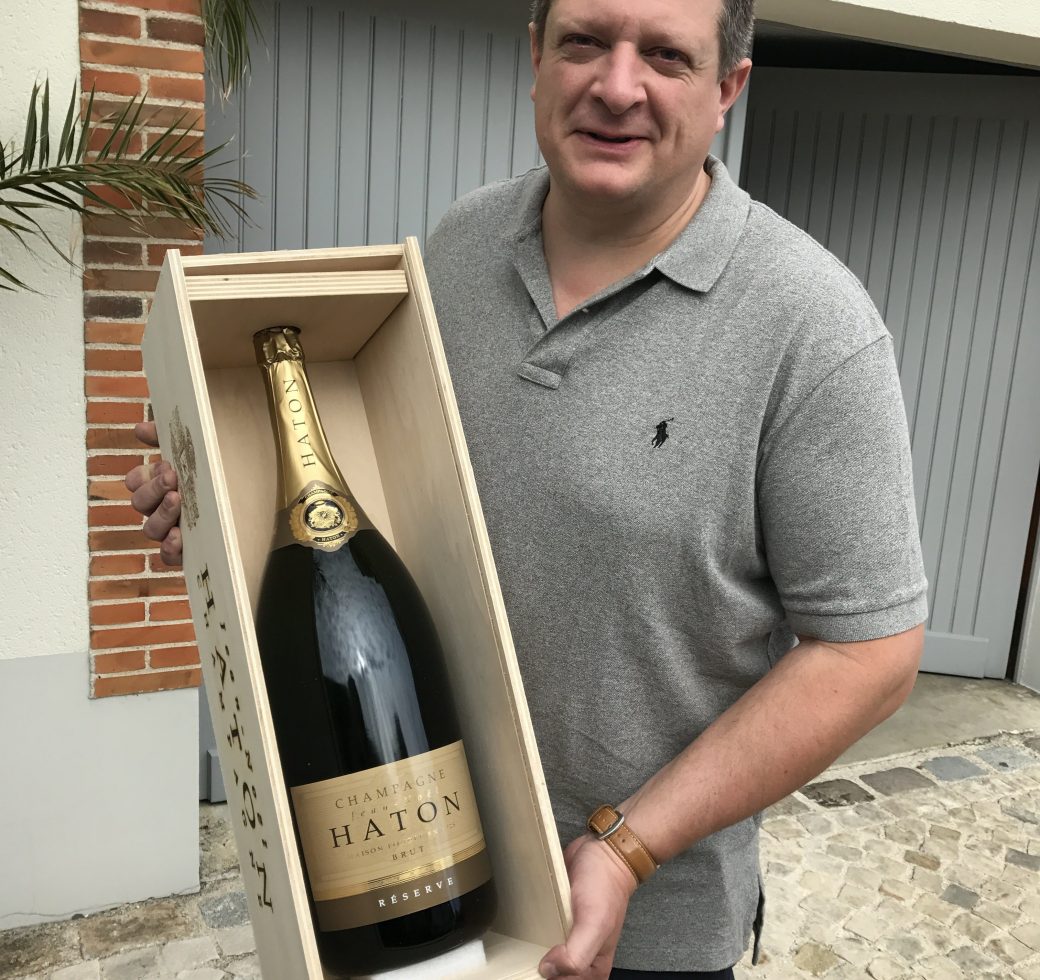 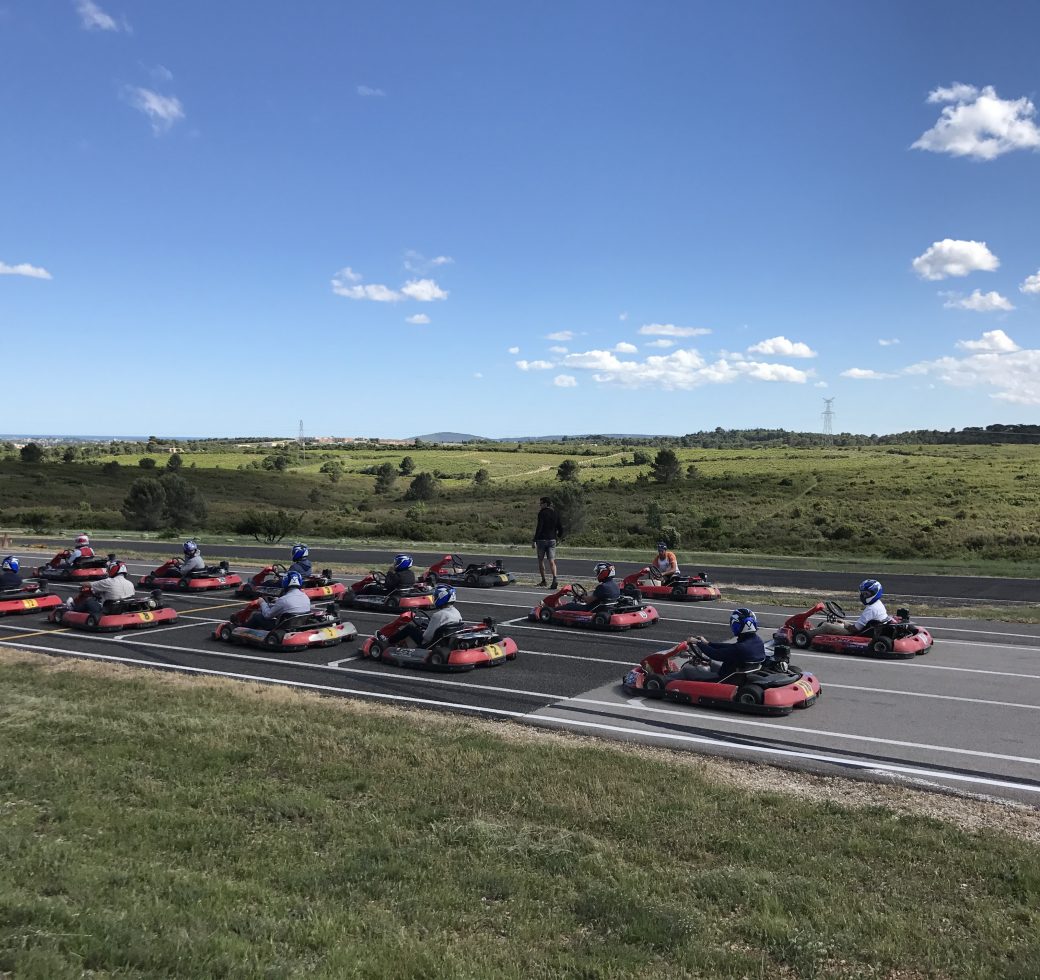 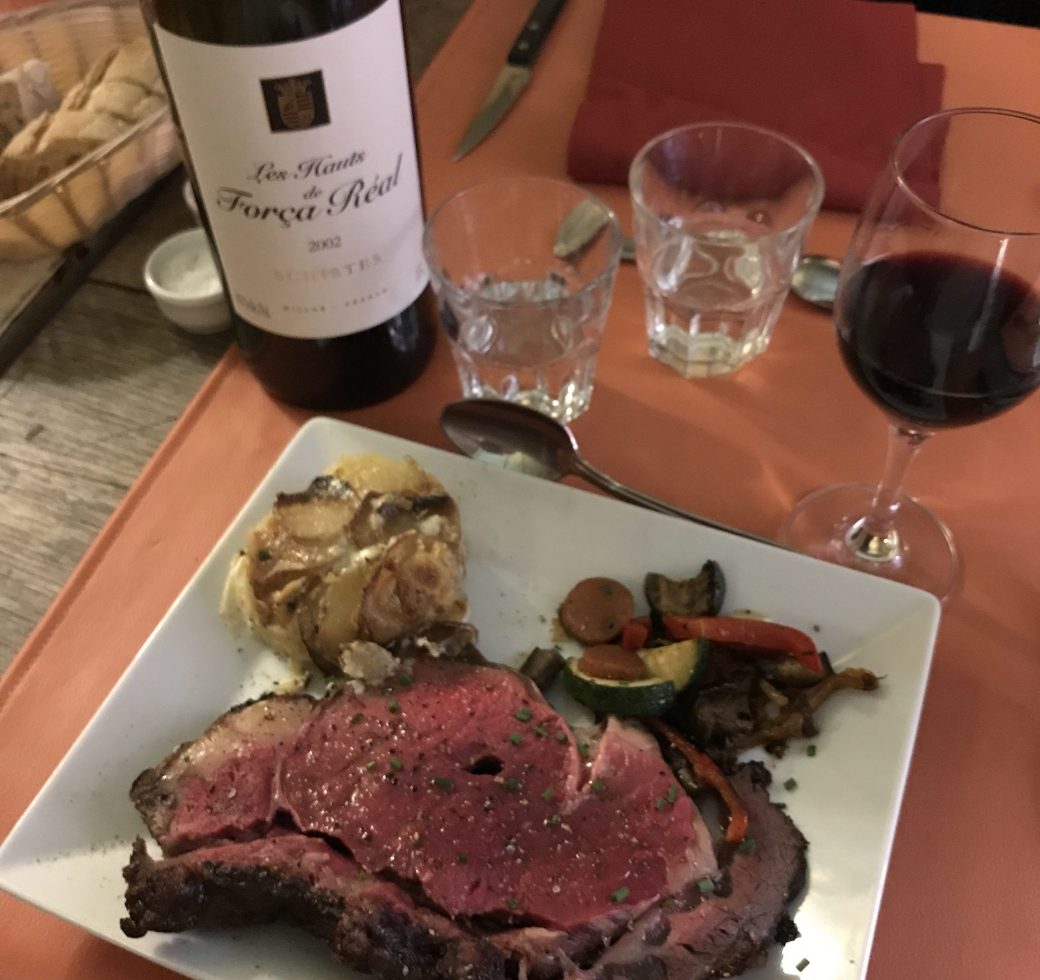 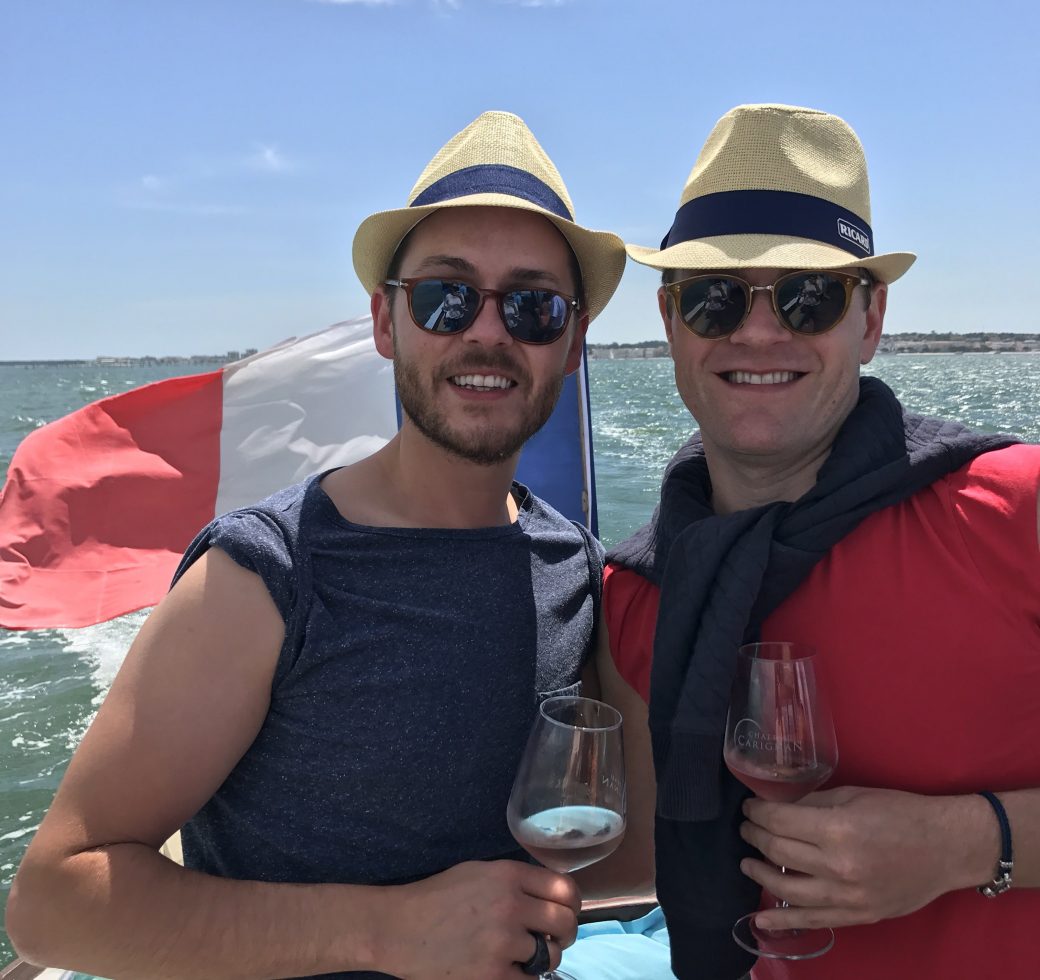 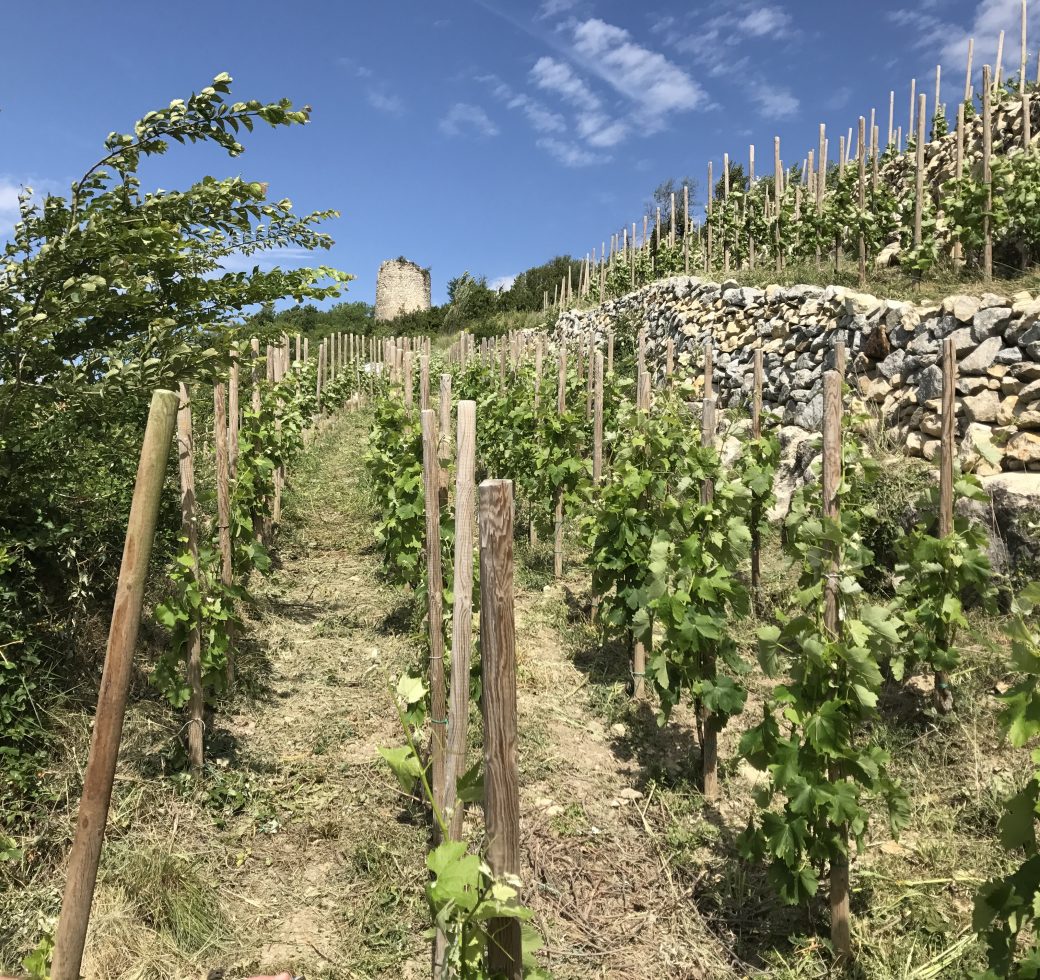 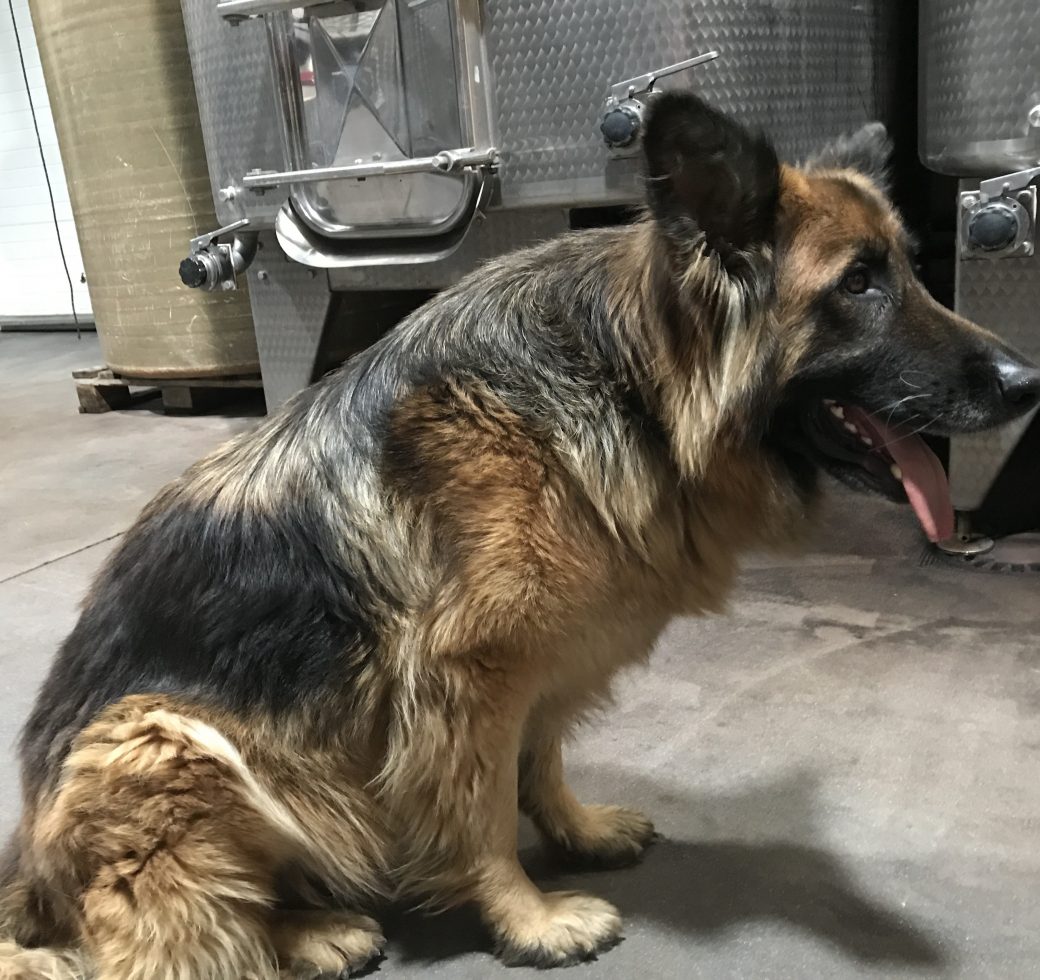 Our late Spring trip to France brought a couple of reps and customers to see some of our direct import producers. Lots of fun was had and we learned a ton about our producers and what 2017 holds. Everywhere we went frost was the talk of the town. Depending on the region, at least 25-35% of the vintage was lost to devastating frosts earlier in the spring.

Wine tours can be a bit of a death march and our agenda was chock full of appointments with lots of driving in between, but there was not a dull moment. Adrien Carrard was our tour guide. We work with Adrien for our direct import portfolio, and he was a gracious host and translator.

Le Grande J (connect the dots on a map and it makes a giant J) tour began with a quick trek to Champagne straight from the airport to visit Sebastien Haton and his family at Jean-Noël Haton situated in the sleepy town of Damery in the western reaches of the Vallée de Marne.

The day was spent visited Dom Perignon’s tomb in Hautvillers en route to key Chardonnay and Pinot Noir holdings there. After time tasting in the cellar (look for our large format offer for November and December) and lunch in Epernay, we spent time checking out personal favorite Grand Cru villages of Chouilly, Avizé, and Cramant in the Côtes des Blancs. If you want to continue drinking Champagne into the night with classic French fare, look no further than Bistro le 7. This is the sister (and neighboring) restaurant to the Michelin-starred Les Berceaux.

Day two involved a morning drive spent listening to incredible French radio (check out Sister Rosetta Tharpe) to Préhy in Chablis to visit Céline and Frédéric Gueguen. Céline was busy making preparations for lunch when we arrived, so we hit their two premier cru vineyard sites (Vosgros and Vaucoupin) with Frédéric followed by tank samples of the 2016 wines. 2016 marks a return to steely form for the region. The highlight was the contrast between the almost smoky wine from Vosgros and the salty wine from the fossil-rich soil of Vaucoupin. The 2016 rose from Pinot Noir was also killer.

The lovely couple then hosted in their garden for a home-cooked lunch of jambon persillé (one of my favorites), arugula salad, mozzarella-avocado-tomato salad, Edmund Fallot Chablis mustard, roasted red peppers, local cured ham, brie and ham quiche, 3 kinds of bread, braised carrots and one of the most seasonally appropriate, locally driven cheese boards of the trip. Chaource, Epoisses, Soumaintrain, and a mild local washed-rind. Allez! Then we hit the road south to Beaujolais with a slight detour to pay our respects to the Grand Cru vineyards of Bâtard-Montrachet and Le Montrachet.

Beaujolais is one of the world’s prettiest wine regions and it did not disappoint. From the tops of the hills of Morgon, Moulin-a-Vent, and Fleurie, we observed the holdings of one of our simultaneously traditional and progressive producers, Vignobles Bulliat. Noël Bulliat (our host) and his son Loïc are farming organically in a region that makes it tough to do so. Cellar tastings aloud Noël to show the fruits of their labors. 2016 looks like a tasty vintage and be on the lookout for a small offer of the delicious magnums of Morgon that spends 45 days on its skins and all in amphora before being racked into neutral oak barrels. Ridiculous.

Noël and his wife, Evangeline, speak very little English, but that did not stop them from pulling off a thoughtful (and lively) traditional meal of pâté en croute, fresh pasta tossed in butter, acid-driven salad, and Saucisson Lyonnais. The Saucisson was a lightly cured sausage that is braised in red Beaujolais. Immediately hearty and decidedly bright simultaneously, the dish was undeniably delicious. This meal ended with an excellent cheese board featuring the nearly extinct, Laguiole, Tomme de Savoie, Fourmer d’Ambert, a forgettable Caprice de Deaux, and a vertical (1 week, 2 weeks, 3 weeks, 4 weeks, and beyond) of crottins made by Noël’s sister. There may have been late night ping pong and petanque. Their gîte is very comfortable.

Morning came early for our Day 3 drive to Brézème. This storied appellation once commanded prices comparable to Hermitage in pre-phylloxera France, but the difficulty of planting the steep terrain and other factors reduced the appellation to fewer than 10 hectares. Domaine Lombard led by Julian and Emmanuel Montagnon is working to change that. As we stood on the steep slopes of the Tour du Diable, overlooking the surrounding vineyards of the hill, we could see Julien’s vision taking shape. Restaurant La Table in the town of Porte Les Valence is worth a shot, if in the area.

Next up, Southern Rhône. Our host Thibault Chamfort of Domaine Verquiere in Sablet lives life in the moment. Although it is clear that he plans meticulously, he does not let that get in the way of what’s in front of him in the moment. During his prideful tour of his breezy holdings high on the slopes above Sablet overlooking nearby Gigondas across the Plan de Dieu to the cailloux-laden vineyard on a high-top in Rasteau, he patiently described his philosophy and answered all our questions. All the while, there was mention of his bar opening that evening at 7:45. Sure enough at 7:25 after tasting through all his tanks and current vintages, Thibault excused himself to attend the opening. If you are in Sablet, his Magnum wine bar is open for business and serving up well-priced wines from the area. La Table de Magali can be relied upon for solid local food and there’s a quaint in on site.

To-go bottles of Champagne and roadie beers for the walk to our gîte, made the morning come way too early. We meandered by the Châteauneuf-du-Pape through Avignon (Sur le pont d’Avignon) down to the Etang du Thau for oysters and Picpoul. The sound is filled with oyster beds and the shores lined with oyster house here you can buy oysters to go, or stick around for a bite. Le Mas de Jeaune is one I can recommend. One of the absolute best dishes of the entire trip was their roasted oysters topped with a mix of saffron, anchovies, green olives, butter, garlic, and emmenthaler. The local baby octopus tart, Tielles Setoise is also recommended. All of course washed down with the 2016 Picpoul du Pinet from Vignerons de Florensac.

After a run and karting (go cart racing) at Circuit Elceka,  we made our way to the cozy comfort of Éric Prissette’s Villa Symposia. A great spot just for relaxing just outside of the town of Pezénas, Villa Symposia is almost a caricature of French beauty, Fields of poppies break up the vines growing out of fossil-filled soils. Bulgarian winemaker, Nenko Dunev, speaks 5-6 languages and his English is great. After a walk through the 3 main terroirs of the property, we tasted tank sample blends of 2015 wines. Their gracious home-cooked dinner made magnums of current and past release go down a treat. Pro-tip: head into charming Pézenas for a walk about. The village has plenty of shopping to help you provide gifts to those that don’t make the trip and the Saturday food market showcases the foods from the area. Keep your eyes peeled for a very cool record shop with lots of cool, French vinyl.

Our next stop found us in Roussillon 20 miles from the Spanish border to visit Domaine Força Real. This region is a real steal for value wines and Cyril Henriques and his family are making wines of extraordinary quality. After walking the schists-rich slopes of the domain, we tasted current vintages of the wines looking out onto Mt Canigou, the highest peak of the Pyrenees, while enjoying bites of pa amb tomiquet (Catalan tomato bread), fuet (Catalan salami), Iberico ham, salad with goji berries dressed with oil and vinegar from the domain, and a breathtaking cheese selection, 18-month-old Comté, black label Rochefort, and Camembert au lait cru. The lunch finished with 20-year-old Muscat served directly from barrel and almond cookies.

We headed from lunch to the picturesque village of Colliure for a walk around. Winding streets, lovely shops, pebbly beach, and fortified jetty with active French SUPing, spearfishing and windsurfing provided the backdrop. Then off to a retreat in the middle of vineyards on Cap Bear. Freshly harvested (20 minutes before we arrived) oursin (sea urchins) were served in an abundance I may never live to see again. Simply glorious.

Perpignan’s central train station was described by Salvador Dalí as the “center of the universe.” The Roussillon capital’s architecture is reminiscent of Catalonia’s more famous city, Barcelona. Restaurant Le Mas Chabry is a meat lover’s paradise on the outskirts of the city. Spit-roasted meats abound on the menu, but the chef was expecting us. A brontosaurus prime rib was roasted to bloody perfection.

Top tip: When driving anywhere near Toulouse, head to any number of the Auberges that are off nearly every exit. L’Auberge du Moulin Castelsarrasin provided nap-inducing cassoulet along with foie gras torchons with espelette, wild cherry macaroons. Yum!

Our final stop on the wine tour landed us at Château Carignan in Cadillac about 15 minutes outside of the city of Bordeaux. The stunning château produces the top-selling Bordeaux in the city of Bordeaux and it is where we stayed for our time in Bordeaux. Bordeaux was seriously affected by this year’s frost and you can see evidence throughout.

Dinner out in the beautiful city of Bordeaux and a late night on the town provided the mindset requisite for our second day at the Château. A tasting with winemaker, Hervé Gineste led to a light lunch on the patio. Pasta salad, a tangy salad of bitter greens, and hearth-roasted skirt steak with our final cheese board of Rocamour, Cantal, and crazy good Bleu de Causses.

Then off to Bassin d’Arcachon for an impromptu boat ride on the traditional vessels of the area, Pinasses (watch how you say that). Local oysters were consumed and plenty of Château Carignan L’Orangerie Blanc and Rosé 2016 consumed. It was indeed a “3 hour tour, a 3 hour tour.” If you are in good health and mind, do as we did and hike to the top of the Dune of Pilat. This 350-foot gigantic dune’s peak provides a commanding view of the basin below and Champagne is the recommended refresher for your efforts. Check out nearby La Co(o)rniche in Pyla-sur-Mer for a cleaned-up meal with fresh seafood. Back at the Château our night ended with leftovers of cassoulet and the cheese board washed down with back vintage snags back to the warm 2003 alongside 2005, 2009, and 2011.

Final tip: If you need a great cup of coffee in Paris, head straight to Loustic at 40 Rue Chapon. Run by a Brit with beans roasted in Antwerp, this café rocks. 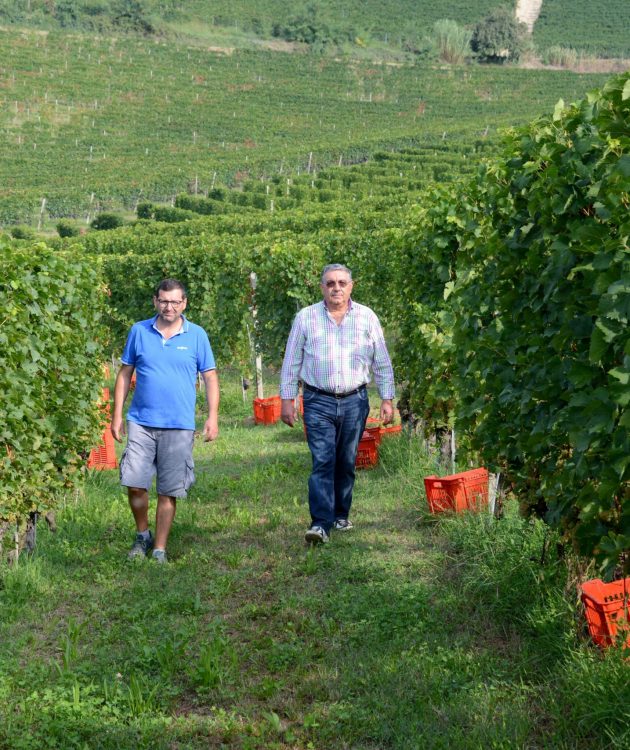 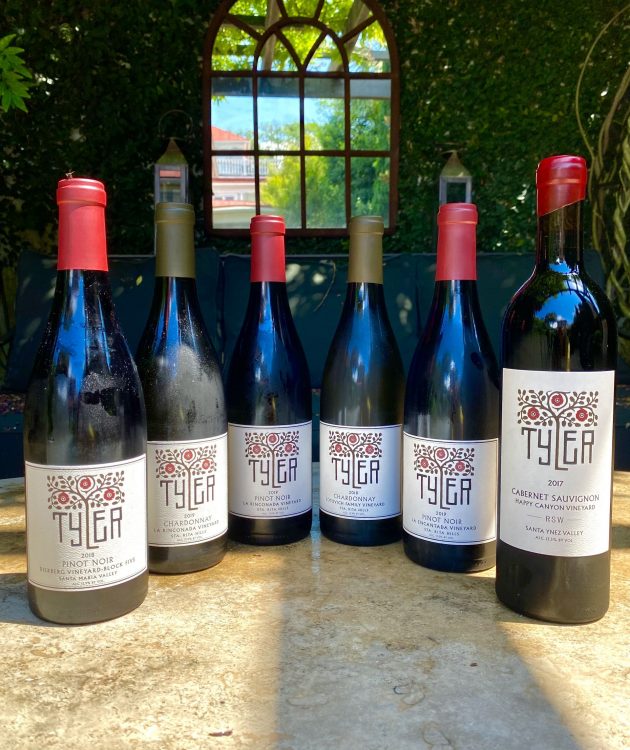 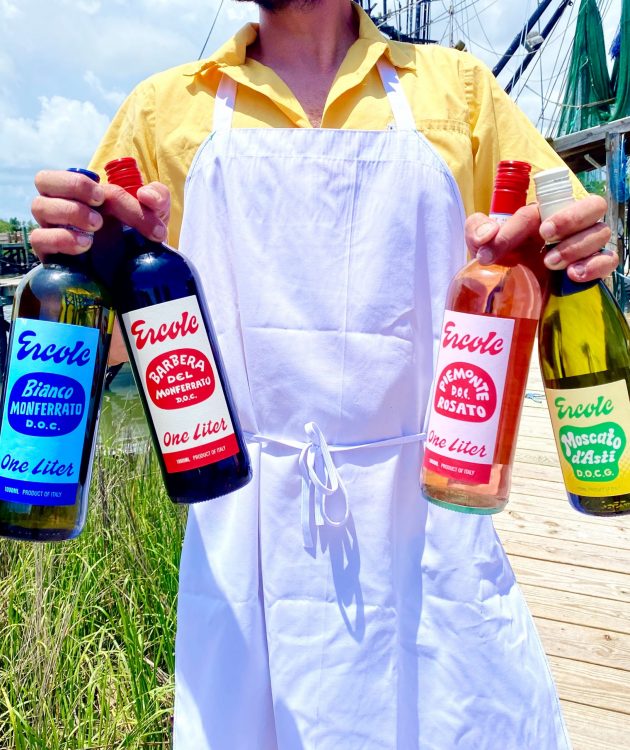